In 2007, Jan Arne Petersen added a D-Bus API to what was still pretty much an import into gnome-control-center of the "acme" utility I wrote to have all the keys on my iBook working.

It switched the code away from remapping keyboard keys to "XF86Audio*", to expecting players to contact the D-Bus daemon and ask to be forwarded key events.

In 2013, we added support for controlling media players using MPRIS, as another interface. Fast-forward to 2021, and MPRIS support is ubiquitous, whether in free software, proprietary applications or even browsers. So we'll be parting with the "org.gnome.SettingsDaemon.MediaKeys" D-Bus API. If your application still wants to work with older versions of GNOME, it is recommended to at least quiet the MediaKeys API's unavailability.

TL;DR: Remove code that relies on gnome-settings-daemon's MediaKeys API, make sure to add MPRIS support to your app.

Posted by Bastien Nocera at 13:12 No comments:

Just about a year after the original announcement, I think it's time to see the progress on power-profiles-daemon.

Note that I would still recommend you read the up-to-date project README if you have questions about why this project was necessary, and why a new project was started rather than building on an existing one.

The project was born out of the need to make a firmware feature available to end-users for a number of lines of Lenovo laptops for them to be fully usable on Fedora. For that, I worked with Mark Pearson from Lenovo, who wrote the initial kernel support for the feature and served as our link to the Lenovo firmware team, and Hans de Goede, who worked on making the kernel interfaces more generic.

More generic, but in a good way

With the initial kernel support written for (select) Lenovo laptops, Hans implemented a more generic interface called platform_profile. This interface is now the one that power-profiles-daemon will integrate with, and means that it also supports a number of Microsoft Surface, HP, Lenovo's own Ideapad laptops, and maybe Razer laptops soon.

The next item to make more generic is Lenovo's "lap detection" which still relies on a custom driver interface. This should be soon transformed into a generic proximity sensor, which will mean I get to work some more on iio-sensor-proxy.

The goal was always to have the user in control, but we still needed to think carefully about how the UI would look and how users would interact with it when a profile was temporarily unavailable, or the system started a "power saver" mode because battery was running out.

The latter is something that David Redondo's work on the "HoldProfile" API made possible. Software can programmatically switch to the power-saver or performance profile for the duration of a command. This is useful to switch to the Performance profile when running a compilation (eg. powerprofilesctl jhbuild --no-interact build gnome-shell), or for gnome-settings-daemon to set the power-saver profile when low on battery.

The aforementioned David Redondo and Kai Uwe Broulik also worked on the KDE interface to power-profiles-daemon, as Florian Müllner implemented the gnome-shell equivalent. 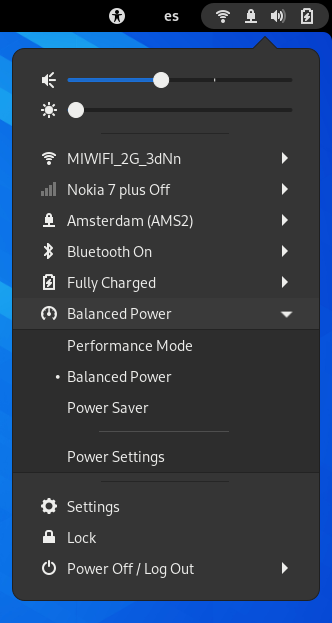 Promised by me, delivered by somebody else :)

I took this opportunity to update the Power panel in Settings, which shows off the temporary switch to the performance mode, and the setting to automatically switch to power-saver when low on battery.

Low-Power, everywhere
Talking of which, while it's important for the system to know that they're targetting a power saving behaviour, it's also pretty useful for applications to try and behave better.
Maybe you've already integrated with "low memory" events using GLib, but thanks to Patrick Griffis you can be an event better ecosystem citizen and monitor whether the system is in "Power Saver" mode and adjust your application's behaviour.
This feature will be available in GLib 2.70 along with documentation of useful steps to take. GNOME Software will already be using this functionality to avoid large automated downloads when energy saving is needed.
Availability
The majority of the above features are available in the GNOME 41 development branches and should get to your favourite GNOME-friendly distribution for their next release, such as Fedora 35.
Posted by Bastien Nocera at 15:50 No comments: