GNOME 3.7.3 just got released earlier today, and includes some great new work. I won't be posting screenshots, because some of the UIs aren't final, and we'll be iterating until 3.8 is released (and it's my birthday ;).

We've cleaned up gnome-settings-daemon plug-ins, and gnome-control-center panels, as well as removing the support code for GNOME Fallback, saving us around 10k lines of code.

gnome-control-center (now "Settings" in the UI) is faster to start, and gnome-settings-daemon require less code to write additional plug-ins.


With the above panels merged, we're left with the re-design of the Power panel, which should mean the end of the "Screen & Brightness" panel (half of the settings went to the Privacy panel, the other half will go to the Power panel).

First, users of Wacom tablets, you'll be happy to know there's now a button you can press to see, in an OSD, the current configuration of your tablet buttons. This feature has been long in the making, but the results are great. There's coverage for every tablet known to libwacom, and support for touchrings, touchstrips and modeswitch buttons. Select the button you want to use for the help in the Settings panel.

We also have some unfinished features.

The remote-display plugin will disable animations in the desktop when using the desktop over VNC or Spice.

And the cursor plugin will hide the mouse cursor until first used, or when using a touchscreen, similarly to what Windows 8 supports (it's the only system other than ours that supports both cursor pointers and touchscreens).

Those 2 plugins should hopefully be working by the time of the GNOME 3.8 release.

Seeing as everyone is making job-related posts, I thought I'd join in the fun.

After 10 years of service, I've left Red Hat UK on the 31st of October to join Red Hat France on the 1st of November.

I now live in the birthplace of cinema and of French gastronomy, so poke me if you want to talk GNOME or Linux over beers. I've already found the English pub.
Posted by Bastien Nocera at 20:18 3 comments: Links to this post 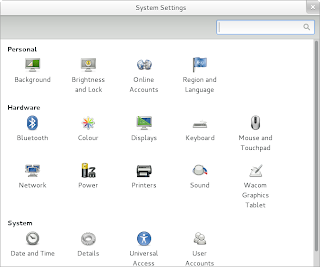 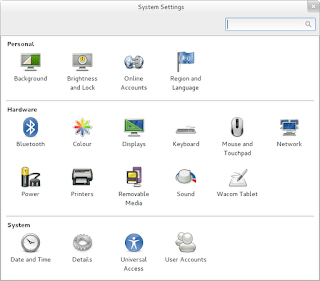 Update: Fixed a double-negative. Also note that there are some differences between my screenshots and reality, like the separators, as my system wasn't fully updated.
Posted by Bastien Nocera at 13:27 18 comments: Links to this post

In 2009, I wrote a driver to make the infra-red remote on my original MacBookAir work out-of-the-box on Linux. The driver was rejected upstream on the basis that the device would soon be supported through more generic means. In the meanwhile, it lived in Fedora's kernel tree, and I took some notes about implementing pairing, so that only your remote would work with your computer.

I'm posting this now because I wanted to poke at a MacOS X application today, and couldn't for the life of me remember the name of the program to monitor disk-activity. Hope this finds its way to a search engine near you.


Now one could implement remote pairing using a sysfs attribute, a udev helper to apply the pairing across reboots, and PolicyKit helper to set and save the paired UID.

This will be left as an exercise to the reader :)
Posted by Bastien Nocera at 16:45 No comments: Links to this post 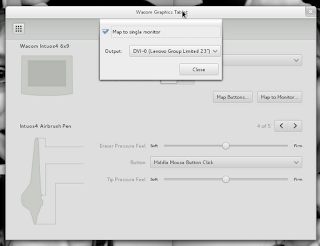 There are a number of features that unfortunately didn't make the cut, mostly due to the lack of support from the X.org drivers. Mode switching currently doesn't advertise the current mode by changing the LED, and the OLEDs that show the bindings for each key stand empty.
Posted by Bastien Nocera at 16:36 3 comments: Links to this post

After seeing, this article about "How secure is Paypal for eBay sellers" in this morning's Guardian, I'll share my personal experience with you.

In October, I sold my first generation MacBook Air on eBay, and got a buyer within a day for the £500 "Buy It Now" price. "Buy It Now" requires using Paypal, and the £500 (minus commission) appeared in my Paypal account¹. After a bit of to and fro, the buyer got in contact, and suggested that he come and pick it up. Saving about £30 of shipping, and sorting out the sale faster, strike me as good ideas.

The "buyer" said he couldn't come, sent one of his "employees". A very courteous man came to pick the laptop. In hindsight, he seemed slightly uncomfortable, and looked like he was very happy to see how easy it was going to be.

The spooky thing is that within 40 minutes -- note, not 3 hours, not a day after, not the day before) -- within 40 minutes of the laptop getting picked up, the holder of the eBay and Paypal accounts submitted an "unauthorised account activity claim", leading to "payment reversal" (me owing £500 to Paypal²).

During my call to eBay's customer support, I was told that "I had nothing to worry about" (I'm guessing that would be the case as long as I repaid the £500). Paypal promptly sent a mail mentioning they needed my help, but with very little possibilities from my side ("no courier tracking number? Give us the money now").

Surrey Police failed to find the culprits, with the 2 mobile numbers associated with the con only being pay-as-you-go phones (topped up in a little convenience store in North London that only keeps a day's worth of CCTV).


And as opposed to Mssrs Lodge and Reakes, Paypal didn't reimburse me anything, and I'm £500 out of pocket.

¹: I'll pass you the details on eBay referring to a closed Paypal account that meant I got conned two days later than the "buyers" anticipated.
²: On an account that was already closed, see ¹.

As mentioned by Cosimo, we have a new library to help us implement the settings you saw: libwacom.

libwacom is there to give us metadata about tablets, whether or not they are connected to your system, the list of styli it supports, as well as information about the styli themselves. As you can see from the UI, it's pretty important that we know:

In the past, all this information was only available within the drivers (as comments), exported in different ways (sysfs attributes), non-machine readable in public documentation, or, worst of all, hidden in Wacom's internal drivers for OS X or Windows.

So if you have a Wacom tablet, send us a definition file for your tablet, so you can configure it with the impression that the software actually knows about your device.

After knowing what each tablet had to offer, we had to have a way to match the definitions to XInput devices, assign settings per-tablet, and importantly, switch stylus configuration when the user switches stylus. This is done using the new GsdWacomDevice and GsdWacomStylus objects, shared between gnome-settings-daemon (which will apply the configuration) and gnome-control-center (which will set the configuration).

This also means we have a few debugging applications, such as list-wacom in gnome-settings-daemon, to show you the attached GsdWacomDevices, or test-wacom in gnome-control-center, to test display of particular tablets if you don't own them (this is the place where I spend a lot of time).

Peter Hutterer, my input buddy at Red Hat, who made the original Wacom panel for GNOME 3.2, and the first version of libwacom, is currently spending a lot of time on Multi-Touch, and fixing bugs I report in the Wacom driver.

Jason Gerecke, from Wacom, who did most of the initial work on calibration support, is working on the related display-mapping. This will allow choosing whether a tablet's working area is the whole desktop, or a single monitor when in multiple monitors are used.

For my part, after fixing the layout bugs that so annoy me in the settings panel, I'll be starting work on tablet button mapping. I look forward to making the LEDs on the tablet match up with the selected keyboard shortcut!

Many thanks to Cosimo and Monty for helping out with presenting the work, and doing the video.
Posted by Bastien Nocera at 13:07 11 comments: Links to this post