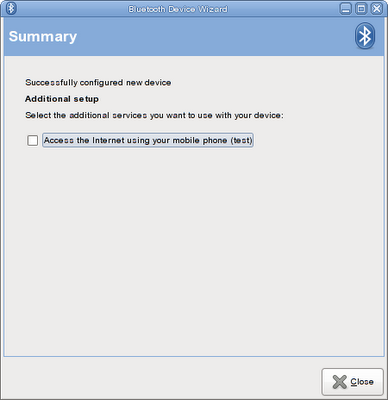 We now have plugins in gnome-bluetooth. The purpose is to allow third-party applications to offer additional setup steps for the Bluetooth device you just configured.

The above screenshot shows an example plugin that NetworkManager could provide, and with the click of a button, you'd have PAN set up between your computer and your mobile phone.

If your phone supports SyncML, then Conduit could show a button to allow setting up syncing, or when setting a GPS, you could have a button to set it up as the default GPS device for GeoClue.

Those plugin-provided widgets will also be available in a device properties dialogue for the Bluetooth preferences, when I get to it.

PS: Diego has kindly agreed to help out with the FreeFA organisation.
PPS: The widget layout is pretty broken, feel free to send patches through bugzilla.
Posted by Bastien Nocera at 17:37 4 comments:

Dear Diego, let's have a wager

Diego, here's a little bet for you. The supporter of the losing team in tonight's final will organise the FreeFA tournament?
Posted by Bastien Nocera at 18:17 3 comments: 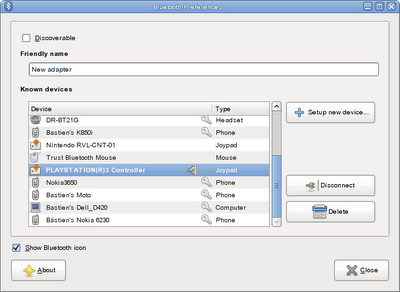 As promised, gnome-volume-control in master now has fade and subwoofer support, as well as instant-apply for the default output selection. We just need to be able to set it up for 5.1 now... 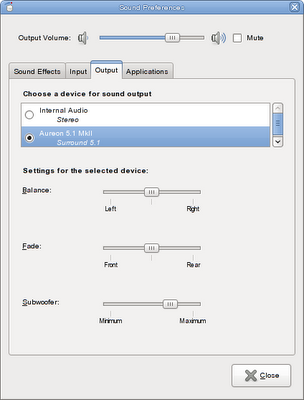 Over the past week, with rock star Dan Williams, we've been working on Bluetooth support in NetworkManager. You can now access the Internet using your Bluetooth mobile phone as long as:
This should hopefully be working for Fedora 12.
Posted by Bastien Nocera at 23:19 12 comments:

A couple of months ago, I received a loaded Dell Mini 10, running a version of Ubuntu from last year, loaded up with proprietary and custom drivers.

If you look at it without giving a second thought at the kit inside, it's quite nice: nice 10" glossy screen, integrated webcam, 3G modem with GPS-A, dual-DVB-T tuner, Bluetooth, WLAN/Ethernet, HDMI output, SD card reader.

Try to run anything other than the shipped Ubuntu (and that even goes for a newer version of Ubuntu), and you'll be in the mud.

The graphics card is the PR problem that's Poulsbo. The wireless card is a Broadcom 4322, with no free drivers, the modem gives Dan Williams nightmares (see the Swedish Invasion part), and the touchpad's driver never got upstreamed.

Adam had a bit of luck getting the Poulsbo going on Fedora 10. I haven't been so lucky under F11 yet, and the wireless card could apparently work with the kmod-wl package from RPMFusion. As for the 3G modem, I'm sure we'll be able to work something out to make it work as expected with a bit of work.

I'll leave others to complain about the «Poulsbong» (as it's been nicknamed) graphics card, and focus on the touchpad. The Elantech touchpad is the kind of touchpad that would make me want not to buy this laptop. No separate buttons, you instead need to click at the bottom of the touchpad area, and that gets awfully tricky for drag'n'drops. Right, this laptop didn't cost me much.

The real problem with the touchpad is that it work to its full capabilities with the stock kernel's drivers (it will even stop working when psmouse can't resync with it). But the shipped Ubuntu could, and the kernel logs seem to point at a modified psmouse. So I drop a mail to Jorge Castro, who passes me on to the manager responsible for the Dell OEM stuff.

After many attempts at getting the source code for that obviously GPL driver, I get the answer:

I believe you're mistaken in assuming that the code we have is merely a
modified version of the psmouse driver, e.g. there's a user space
component as well.

Arjan's code appears to be different.

Why did it take 3 weeks of arguing with some middle manager as to whether the code was GPL or not to find out that it was 1) freely available but unfindable 2) it had Arjan's name in the copyright, but apparently wasn't open source, 3) never upstreamed.

We were not amused.

To sum this up:

An era comes to an end

I'm not changing jobs, or getting married, it's all a bit more important than that.

The GStreamer boys have come forward, fixed a lot of bugs, and implemented new features, which means that the GStreamer backend was getting held back by the features of the xine-lib backend.

Oh, and before people start complaining: