Making your own retro keyboard

We're about a week before Christmas, and I'm going to explain how I created a retro keyboard as a gift to my father, who introduced me to computers when he brought back a Thomson TO7 home, all the way back in 1985.

The original idea was to use a Thomson computer to fit in a smaller computer, such as a CHIP or Raspberry Pi, but the software update support would have been difficult, the use limited to the builtin programs, and it would have required a separate screen. So I restricted myself to only making a keyboard. It was a big enough task, as we'll see.

How do keyboards work?

Loads of switches, that's how. I'll point you to Michał Trybus' blog post « How to make a keyboard - the matrix » for details on this works. You'll just need to remember that most of the keyboards present in those older computers have no support for xKRO, and that the micro-controller we'll be using already has the necessary pull-up resistors builtin.

I chose the smallest Thomson computer available for my project, the MO5. I could have used a stand-alone keyboard, but would have lost all the charm of it (it just looks like a PC keyboard), some other computers have much bigger form factors, to include cartridge, cassette or floppy disk readers.

The DCMoto emulator's website includes tons of documentation, including technical documentation explaining the inner workings of each one of the chipsets on the mainboard. In one of those manuals, you'll find this page: 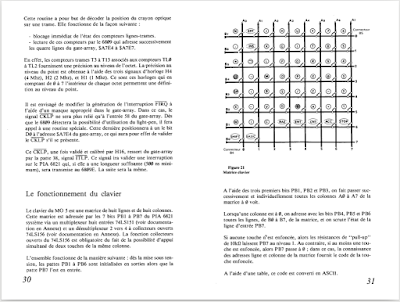 Whoot! The keyboard matrix in details, no need for us to discover it with a multimeter. 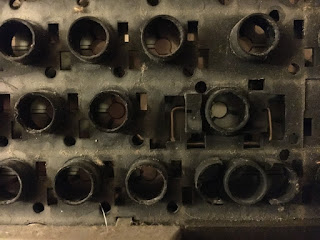 That needs a wash in soapy water

After opening up the computer, and eventually giving the internals, and the keyboard especially if it has mechanical keys, a good clean, we'll need to see how the keyboard is connected. 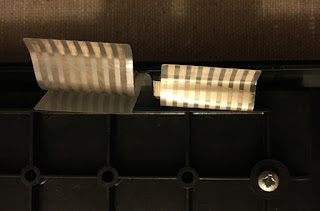 Those keyboards usually are membrane keyboards, with pressure pads, so we'll need to either find replacement connectors at our local electronics store, or desolder the ones on the motherboard. I chose the latter option. 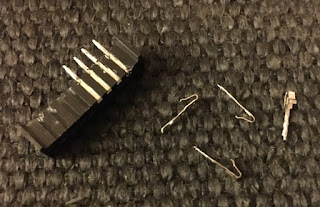 The micro-controller in my case is a Teensy 2.0, an Atmel AVR-based micro-controller with a very useful firmware that makes it very very difficult to brick. You can either press the little button on the board itself to upload new firmware, or wire it to an external momentary switch. The funny thing is that the Atmega32U4 is 16 times faster than the original CPU (yeah, we're getting old).

I chose to wire it to the "Initial. Prog" ("Reset") button on the keyboard, so as to make it easy to upload new firmware. To do this, I needed to cut a few traces coming out of the physical switch on the board, to avoid interferences from components on the board, using a tile cutter. This is completely optional, and if you're only going to use firmware that you already know at least somewhat works, you can set a key combo to go into firmware upload mode in the firmware. We'll get back to that later.

As far as connecting and soldering to the pins, we can use any I/O pins we want, except D6, which is connected to the board's LED. Note that any deviation from the pinout used in your firmware, you'd need to make changes to it. We'll come back to that again in a minute. 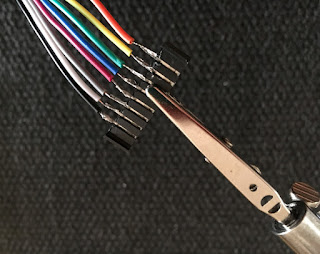 I wanted to keep the external ports full, so it didn't look like there were holes in the case, but there was enough headroom inside the case to fit the original board, the teensy and pins on the board. That makes it easy to rewire in case of error. You could also dremel (yes, used as a verb) a hole in the board.

As always, make sure early that things would fit, especially the cables! 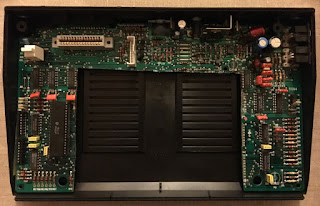 Fairly early on during my research, I found the TMK keyboard firmware, as well as very well written forum post with detailed explanations on how to modify an existing firmware for your own uses.

This is what I used to modify the firmware for the gh60 keyboard for my own use. You can see here a step-by-step example, implementing the modifications in the same order as the forum post.

Once you've followed the steps, you'll need to compile the firmware. Fedora ships with the necessary packages, so it's a simple:

I also compiled and installed in my $PATH the teensy_cli firmware uploader, and fixed up the udev rules. And after a "make teensy" and a button press...

It worked first time! This is a good time to verify that all the keys work, and you don't see doubled-up letters because of short circuits in your setup. I had 2 wires touching, and one column that just didn't work.

I also prepared a stand-alone repository, with a firmware that uses the tmk_core from the tmk firmware, instead of modifying an existing one.

This isn't the first time I hacked on hardware, but I'll repeat some old adages, and advices, because I rarely heed those warnings, and I regret...
That last one explains the slightly funny cabling of my keyboard. 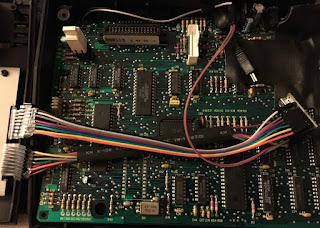 To finish things off nicely, I used Sugru to stick the USB cable, out of the machine, in place. And as earlier, it will avoid having an opening onto the internals.

There are a couple more things that I'll need to finish up before delivery. First, the keymap I have chosen in the firmware only works when a US keymap is selected. I'll need to make a keymap for Linux, possibly hard-coding it. I will also need to create a Windows keymap for my father to use (yep, genealogy software on Linux isn't quite up-to-par).

All this will happen in the aforementioned repository. And if you ever make your own keyboard, I'm happy to merge in changes to this repository with documentation for your Speccy, C64, or Amstrad CPC hacks.

(If somebody wants to buy me a Sega keyboard, I'll gladly work on a non-destructive adapter. Get in touch :)
Posted by Bastien Nocera at 16:48 No comments: