Fedora has had problems for a long while with the default firewall rules. They would make a lot of things not work (media and file sharing of various sorts, usually, whether as a client or a server) and users would usually disable the firewall altogether, or work around it through micro-management of opened ports.

We went through multiple discussions over the years trying to break the security folks' resolve on what should be allowed to be exposed on the local network (sometimes trying to get rid of the firewall). Or rather we tried to agree on a setup that would be implementable for desktop developers and usable for users, while still providing the amount of security and dependability that the security folks wanted.

The last round of discussions was more productive, and I posted the end plan on the Fedora Desktop mailing-list.

By Fedora 21, Fedora will have a firewall that's completely open for the user's applications (with better tracking of what applications do what once we have application sandboxing). This reflects how the firewall was used on the systems that the Fedora Workstation version targets. System services will still be blocked by default, except a select few such as ssh or mDNS, which might need some tightening.

But this change means that you'd be sharing your music through DLNA on the café's Wi-Fi right? Well, this is what this next change is here to avoid.

To avoid showing your music in the caf, or exposing your holiday photographs at work, we needed a way to restrict sharing to wireless networks where you'd already shared this data, and provide a way to avoid sharing in the future, should you change your mind.

Make sure that your versions of gnome-settings-daemon (which implements the starting/stopping of services based on the network) and gnome-control-center match for this all to work. You'll also need the latest version of all 3 of the aforementioned sharing utilities.

(and it also works with wired network profiles :) 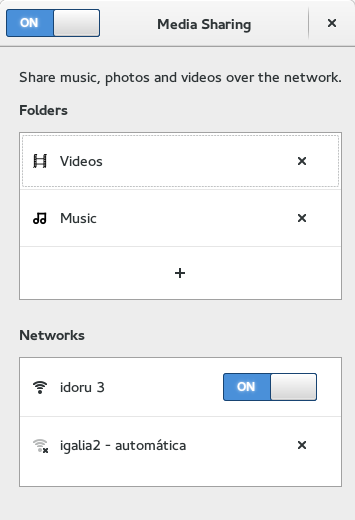