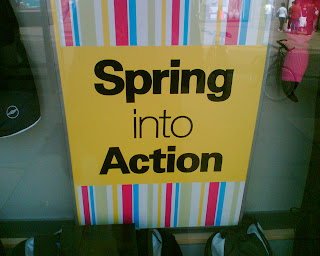 This time, the hero is Jan Arne Petersen, who added activation failure support to the plugin API, and then ported the GNOME 2.18 media player keys support, and LIRC remote control support to plugins. He also ported a lesser known functionality of Totem to the plugin system. The Gromit plugin allows "telestrator" mode. A picture speaks a thousand words. 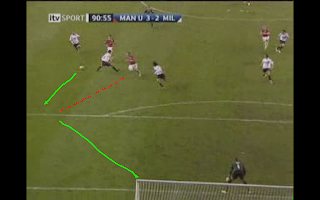 It's not that well integrated into Totem itself, but the default configuration is still pretty good for Paul to have used it with his tablet to show american football moves.


On Tuesday, I received my new work laptop, a Dell Latitude D420. It's a shame I received it the day before they announced they were doing flash-drive versions. The latch sucks, the right of the underside gets pretty hot, and the screen is not as good as on my Sony laptop. But I didn't pay a penny for it, it's very light, and has cool shit like an ambient light sensor and a fingerprint reader, so it's all fine by me. I started filing a good bunch of bugs about making it work better, which will hopefully get fixed in due time.

I fucking love those games. What a night yelling at the screen, us, the el cheaopo pundits.

Update: And you can buy Dida for cheap as well.
Posted by Bastien Nocera at 22:57 2 comments:

For example, Apple said the framework will allow developers to programatically determine through their own applications whether a specific instant message user is online[...].

We're well known for nicking ideas from Apple, and they also like to steal some from us, which isn't surprising given some of the cross-breeding among the communities that's happened over the years.

They still have a much better record at bringing those features to the users (Beagle vs. Spotlight, where the latter is integrated in many many more applications than Beagle is), and even better at advertising them (with pretty moving pictures).
Posted by Bastien Nocera at 00:06 4 comments:

I spent my Saturday around B&Q and homebase looking for a pressure washer to clean up my patio and some garden furniture, finishing off watching a nail-biting/frustrating draw against Boro.

My Sunday was more helpfully spent drinking beers with a few guys in London after Pete Graner decided to drop in the city. The French presidential election results didn't come as much of surprise, but Chelsea dropping points did.

Mika's Love Today rocks the same way the Scissor Sisters rocked a couple of years ago. More things change, more they stay the same, which makes for good days.
Posted by Bastien Nocera at 00:09 No comments:

Fedora 7 is gearing up, and I'm spending most of my time fixing bugs. If you have a pet peeve (a bug, not a feature) for Rhythmbox, or Totem, be sure to let me know (by filing bugs in Bugzilla!).

I'm very happy that project for accepted for an SoC project. It means I won't have to do it myself, and that the person got the best mentor possible, the BlueZ man himself. And I'm never tired of hearing some success stories with the browser plugin. Changes a bit from all the bugs :/

I hope Aaron finishes his encoding profiles code in time for GNOME 2.20, as I don't won't to have to deal with gnome-media's profile code anymore.

Watched a couple of films: The Interpreter (I wanted to slap and drown Nicole Kidman for most of the film, certainly not her best film by a margin, and Sean Penn should stick to indie movies, which is what we like him for), and The Jacket, a tip-top if weird thriller. Bit like bath water near the end (soapy).

PS: In case you wonder where that title comes from. Plenty more goals where that came from.
Posted by Bastien Nocera at 12:29 No comments:

After a day of work at the factory^Wfixing bugs, I committed some more plugin work to Totem. Philip Withnall wrote a Galago plugin, as featured in the screenie below. It will set your Gossip (with Peekaboo support), or Pidgin (with the gaim-galago plugin) as away when watching a film fullscreen. 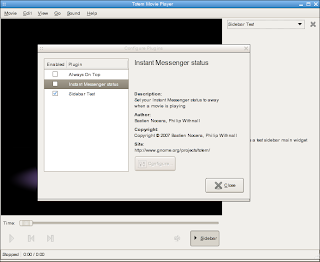 I added support for sidebar plugins, which means people can get cranking at an IMDB cover sidebar, a DAAP browser for videos, or even a tagger for Beagle or Tracker.

Thanks to David Schleef, I got libtool to like me (and my uninstalled shared library). noinst_LTLIBRARIES wouldn't compile a .so, so my plugin loader couldn't find it. The trick is install-pluginLTLIBRARIES:. Thanks David.

PS: fonts don't work one bit in Blogger, so no fancy monospaced font for the bits of code...

I had a very calm and relaxing Easter week-end, some strolling in the castle park under the sun, drank plenty of Pimm's, and some bank holiday gardening. I managed to catch up somewhat on my films, and I watched:
I've also managed to add some covers to my MP3 rips of Mixmag cover CDs. Took a while, but the great discogs had pretty much all of them with decent quality.
Posted by Bastien Nocera at 18:52 5 comments:

I got my evening out to go to the pub to watch my team play their quarter-finals return game against Roma, all expectant, a bit reassured that the result might go our way with the good passing in the first 10 minutes. I needn't be too worried as United showed Roma how to play. What a night!
Posted by Bastien Nocera at 11:46 1 comment:

The playlist parser API has changed!

If you're a user of Totem's playlist parser API, you'll need to update to the new API. The change is pretty straight forward, instead of passing the title and the genre as arguments of the "entry" signal, we now pass a hashtable of extra information to the "entry-parsed" signal.

This means that you should be able to get extra information you couldn't before, such as the duration for a specific entry from ASX playlists, or comments from XSPF playlists.
Posted by Bastien Nocera at 17:18 No comments:

I'd help, but my engine has problems

I've just finished an (almost) all-nighter to finishing stealing code from Rhythmbox. As soon as the licensing is sorted out, Totem will be getting plugins, so I can start cleaning up the code, and fix some long-standing bugs. This might also mean some cool new features like posters, or TV guides. Let's see what we can do.

First Totem plugin ever
Posted by Bastien Nocera at 04:47 10 comments: