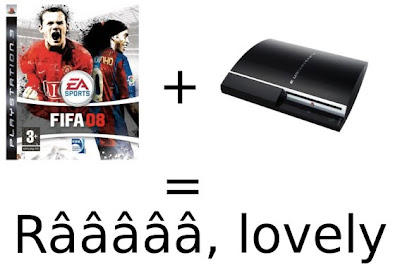 I got my copy of FIFA08 this morning, and I'm having plenty of fun. The gameplay is much less robotic, and pretty flowing once you get used to it, the online play doesn't lag on bit (unlike the mode tacked on the FIFA07 PS2 version). PES fanatics should try it before they knock it. For music lovers, the EA Trax include stuff like Yonderboi, Travis, CSS. I particularly like The Hoosiers and Wir sind Helden. The Play like a Pro mode, where you play a single player in a game is also quite something. Get sick like in an FPS when the screen starts shaking and your view narrowing when you're sprinting the ball at your feet.

I've been playing with the rest of the PS3 as well. Rhythmbox' UPNP plugin doesn't work yet, seems to be something related to the way Coherence sets up its mainloop, but I've been able to play a few recordings direct from my MythTV machine (although the MPEG-2 decoder of the PS3 seems to be sub-par for slightly broken streams).

I'm hadessuk on there, if you fancy a game of FIFA, or a conversation typed at the speed of a tortoise.
Posted by Bastien Nocera at 00:08

I tried the downloadable FIFA08 demo yesterday on my PS3. My brain doesn't seem able to do these games. I never know what player I am and what button does what. If I get the ball I don't know how it happened.

I am heading out soon and probably going to pick up FIFA08. Would be great to have a few online games. I am cptfishhead o the PS3.

Will let you know if I manage to pick up a copy. :)

Murray, I guess it takes some getting used to, if you haven't played the game before. And I found the demo exceptionally hard. Even in Amateur level, with the full game, you won't be finding that many goals.

I'm a PES guy myself, but I just tried the FIFA08 demo for a long time this weekend and I did enjoy it, it's come a long way since the ol "cross it head it goal" repetitiveness of early versions. I'm worried that I won't like PES as much this version...