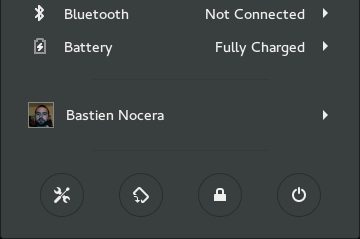 [1]: gnome-settings-daemon, gnome-shell, and systemd will need patches
Posted by Bastien Nocera at 17:31

This is fantastic! I'm really looking forward to having this running on my laptop. Any chance that it'll work with Fedora 22?

Great news! Precisely last month I was thinking about the support ambient light sensors in Gnome.
My MacBook Pro have a built-in sensor and exist some ways to play with this on Linux but not in a convenient way with Gnome. On the other hand, I was planning to craft an Android app to share ambient light sensor data with an desktop PC and adjust brightness and contrast automatically using the old DDC Control, that works perfect with my Dell monitor. I wonder If those features will be supported by Gnome in a near future. Thanks!

Miguel: the sensors in the MacBooks will work, but there are no plans to control stand-alone monitors via such crude controls. If they had their own sensors and allowed the backlight to be changed however...

There's certainly nothing stopping you from wiring this up though.

The problem I see is that "automatic brightness" is confusing: what does that mean? It doesn't convey any connection to ambient light.

Mcat: Feel free to file a bug about that :)

Excellent work, mate! If I may ask you, will gnome enable color customization for a theme something like a made by Sam Hewitt in here http://snwh.org/paper/ . Unfortunately, I see the theme color only applies on a few applications (calculator, editor) but does not apply on most application (directory explorer, gimp, Firefox and others).

I really like if gnome will support such color customization for all application so users will have more choice to modernize their desktop look.

One more request, :), please support transparency, something like windows Aura will be amazing. Thanks.