You might have heard of the C.H.I.P., the 9$ computer. After contributing to their Kickstarter, and with no intent on hacking on more kernel code than is absolutely necessary, I requested the "final" devices, when chumps like me can read loads of docs and get accessories for it easily.

Turns out that our old friend the Realtek 8723BS chip is the Wi-Fi/Bluetooth chip in the nano computer. NextThingCo got in touch, and sent me a couple of early devices (as well as to the "Kernel hacker" backers), with their plan being to upstream all the drivers and downstream hacks into the upstream kernel.

Before being able to hack on the kernel driver though, we'll need to get some software on it, and find a way to access it. The docs website has instructions on how to flash the device using Ubuntu, but we don't use that here.

You'll need a C.H.I.P., a jumper cable, and the USB cable you usually use for charging your phone/tablet/e-book reader.

You might need other things, like git and gcc, but I kind of expect you to already have that installed if you're software hacking. You will probably also need to get sunxi-tools from Koji to get a new enough version that will support the C.H.I.P.

Get your jumper cable out, and make the connection as per the NextThingCo docs. I've copied the photo from the docs to keep this guide stand-alone. 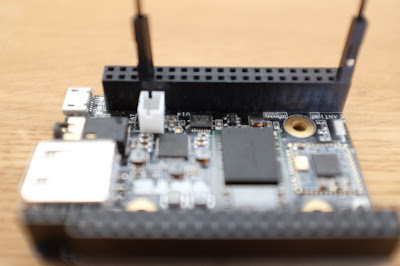 Let's install the tools, modified to work with Fedora's newer, upstreamer, version of the sunxi-tools.

You should see the little "OK" after the "waiting for fel" message:


At this point, you can unplug the jumper cable, something not mentioned in the original docs. If you don't do that, when the device reboots, it will reboot in flashing mode again, and we obviously don't want that.

At this point, you'll just need to wait a while. It will verify the installation when done, and turn off the device. Unplug, replug, and launch moserial as root. You should be able to access the C.H.I.P. through /dev/ttyACM0 with a baudrate of 115200. The root password is "chip".

Obligatory screenshot of our new computer: 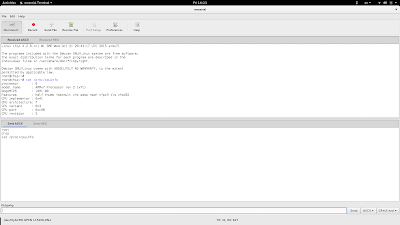 Next step, testing out our cleaned up Realtek driver, Fedora on the C.H.I.P., and plenty more.
Posted by Bastien Nocera at 13:52