As you've probably seen in my previous post, the new Videos UI has part of its interface focused on various channels from online sources, such as the Blip.tv, or videos from the Guardian.

Grilo recently grew support for Lua sources, which means you can write about 100 lines of lua, and integrate videos from an online source into Videos easily.

The support isn't restricted to videos, GNOME Music and GNOME Photos and a number of other applications will also be able to use this to be extended.

Our example is that of a source that would fetch the list of Ogg Theora streams from Xiph.org's streaming directory.

First, define the "source": the name is what will show up in the interface, supported_keys lists the metadata fields that we'll be filling in for each media item, and supported_media mentions we only show videos, so the source can be skipped in music players.

We'll then implement one of the source methods, to browse/list items in that source. First, we cheat a bit and tell the caller that we don't have any more items if you need to skip some. This is usual for sources with few items as the front-end is unlikely to list items 2 by 2. If that's not the case, we fetch the page on the Xiph website and wait for the callback in fetch_cb

Here's the meat of the script, where we parse the web page into media items. Lua doesn't use regular expressions, but patterns. They're different, and I find them easier to grasp. Remember that the minus sign/dash is a reserved character, '%' is the escape character, and '()' enclose the match.

We create a new table called for each one of the streams in the HTML we scraped, with the metadata we said we'd give in the source definition, and send it back to Grilo. The '-1' there is the number of items remaining in the list.

Finally, we call grl.callback() without any arguments to tell it we're done fetching the items.

We're done! You just need to drop this file in ~/.local/share/grilo-plugins/grl-lua-factory, and you can launch Videos or the test application grilo-test-ui-0.2 to see your source in action. 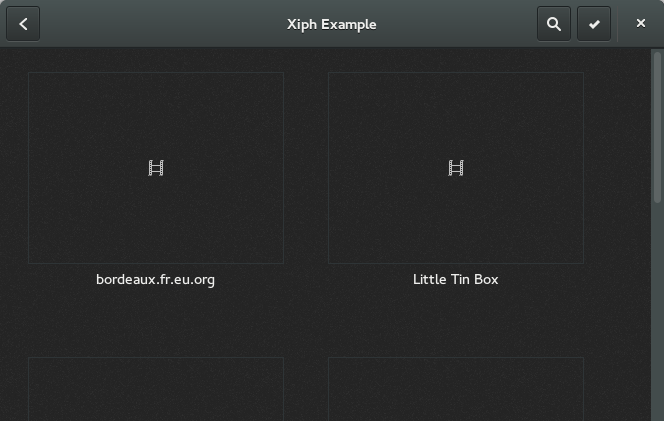 This screen scraping is what Lua is good at, with its powerful yet simple pattern matching. Lua is also easily embeddable, with very few built-in functions which means we can have better control over the API plugins use, a low foot-print, and all the benefits of an interpreted garbage-collected language.

I hear heckles of "Javascript" in the background, so I guess I better address those as well. I think Lua's pattern matching is better than Javascript regexes, and more importantly, Lua is more easily embeddable in big applications, because of its simplicity as a language and a VM. Basically, Javascript (and the gjs implementation we'd likely have used in particular) is too powerful for our use case.

It's obviously possible to avoid this screen scraping when the online source provides data in an easily parseable format (such as Json for which we have Lua bindings). That will be the case of the Guardian videos source (once we've figured out a minor niggle with the 50 items query limit) thanks to the Guardian's Open Data work.

Hopefully it means that we'll have sources for the Wiki Commons Picture of the day (as requested by GNOME alumni Luis Villa) for use in the Background settings, or for Mediagoblin installations.

An aside, for those of you who have videos on a separate network storage, or not indexed by Tracker, there's a hidden configuration to show specific paths in the Channels tab in Videos.

I'm looking forward to seeing more Grilo sources. I feel that this Lua source lowers the barrier to entry, enabling the evening hacker to integrate their favourite media source into GNOME, which probably means that we'll need to think about parental controls soon! ;)

Thanks to Victor Toso for his work on Lua sources, both during and after the Summer of Code, and Juan Suarez for his mentoring and patch reviewing.
Posted by Bastien Nocera at 18:33

I am using Gnome 3.12 on Fedora from the Copr repo.

I tried using this guide to make my own Gnome Videos source but it doesn't seem to do anything (no new source shows in Videos).

The version of grilo-plugins that I have is (0.2.11). Is a newer version needed or some other packages as well?

Korbin: grilo-plugins 0.2.12 is the first version that includes Lua support. It doesn't look like it's available in the copr repo yet though.